"The Building Project – How to Build a House in 4 Days!" 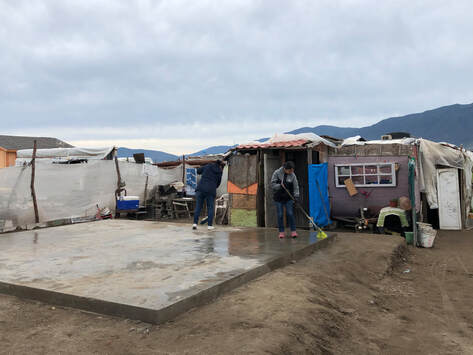 Each family had purchased a lot which they would likely be paying off for many years to come and not have the financial ability to build in the foreseeable future.  The lots were in a “poorer” area with no running water, electricity or sewage systems available as of yet. Yugo poured the cement pad and had the building materials delivered in preparation for our team to arrive.

Day 1
By end of day 1 we had framed all the walls and covered the exterior with plywood panelling we painted.  The footprint of the house was 18 ft by 20 ft.  The roof rafters were stick framed and the roof sheeting was tacked into place.   In addition, the electrical was roughed in – which consisted of one plug plus a light and switch in each of the 3 rooms (2 bedrooms and one common eating / sitting area).
Day 2
Gyproc was installed and the first pass at taping seams and applying mud was done. Also, the windows were installed, the roof was shingled and the bulk of the exterior trim was painted and applied.  The outhouse, purchased from a local company was also painted and the bulk of the interior trim boards were stained.

Day 3
A second coat of mudding was applied, a spray coat of mud was applied to give texture to the surface and the entire interior was painted.   Electrical was completed.   The exterior door was installed and all interior and exterior trim was completed.
In addition, beds for the 5 family members were constructed and the outhouse was shingled with the left over shingles.
Day 4 (morning)
Touch-up on painting completed and the house was cleaned and furnished with table & benches, table for food purchased was built, bedding was purchased and put in place.  The water stand and water tank were positioned.  As with the house build 2 years ago – God showed his impeccable timing and His great attention to detail – just as we moved the water tank into place, the local water truck drove by – and so, I was able to flag down the truck and we were able to bless the family with a filled water tank!
Landscaping around house was tidied up and the hole was dug for outhouse and new outhouse was positioned in its place.
And then there was the ceremony to hand the house over to the family – what an emotional / life moment for each team member to say a few words while holding the house keys before handing them to the family! 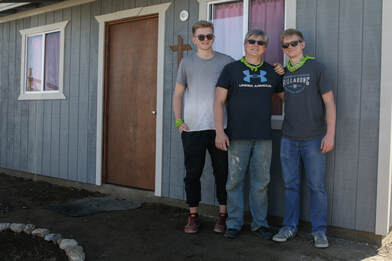 I always feel that we as a team get so much more out of these house builds than even the family gets from receiving the home!